The Garrotxa volcanic nature Park is the best example of volcanic scenery in the Iberian peninsula. It has around fourty volcanic cones and over 20 basalt lava flows. You will find lots of activities to do in these surroundings. 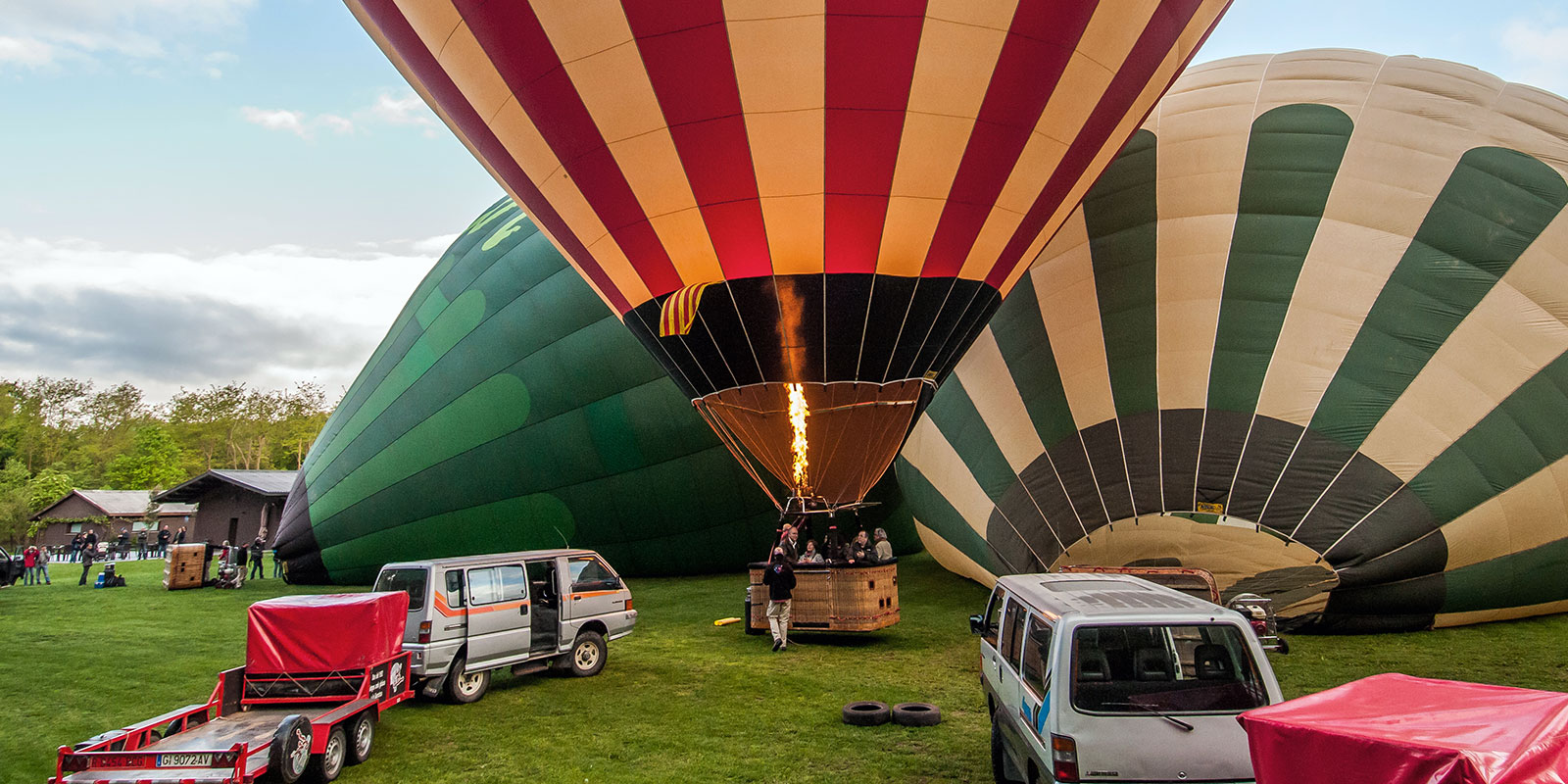 Balloon flying is a different way to discover the scenery and the volcanoes, ideal for lovers of nature and for those seeking new birds’ eye sensations.

RIDES ON DONKEYS AND MEALS 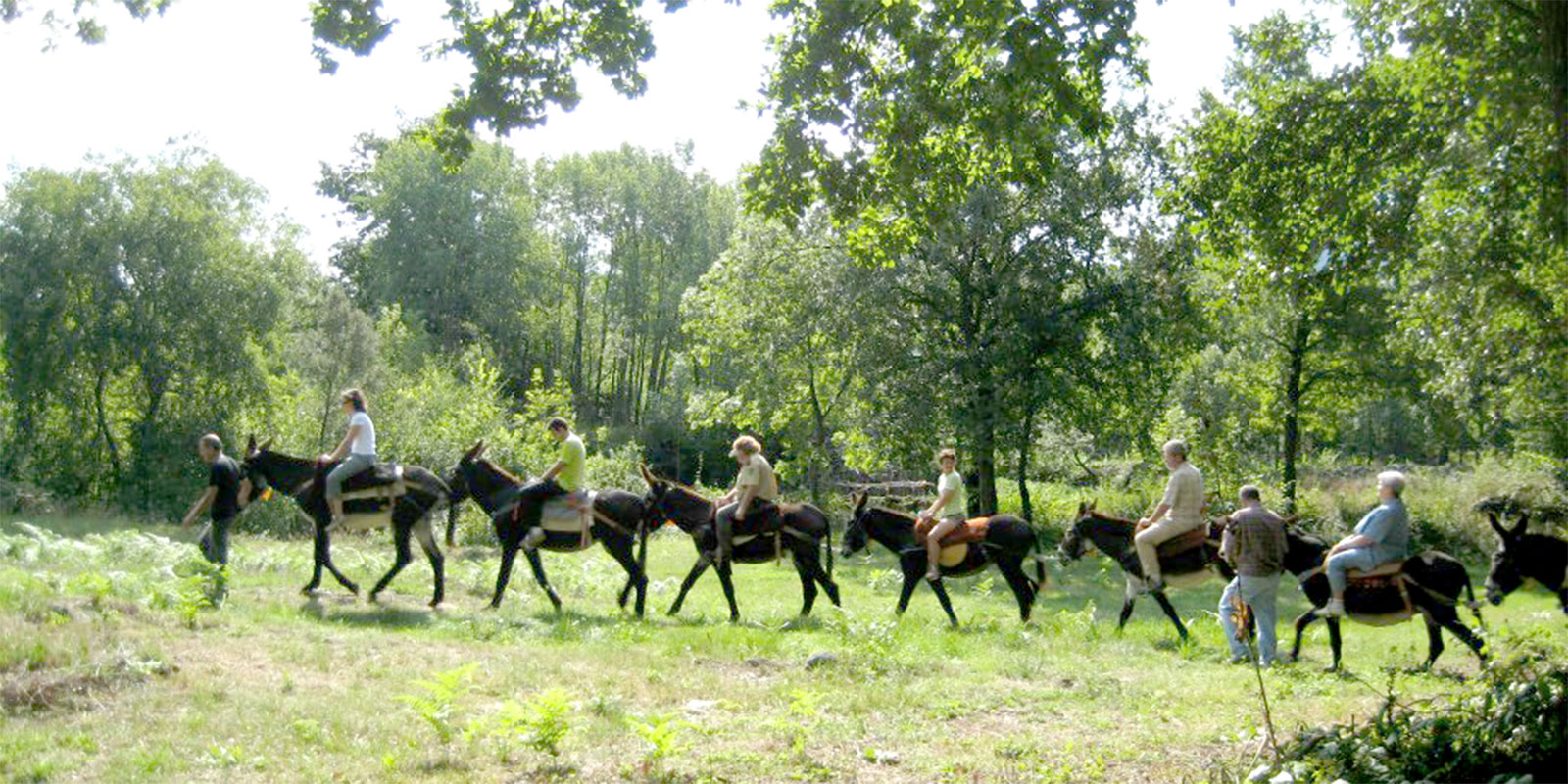 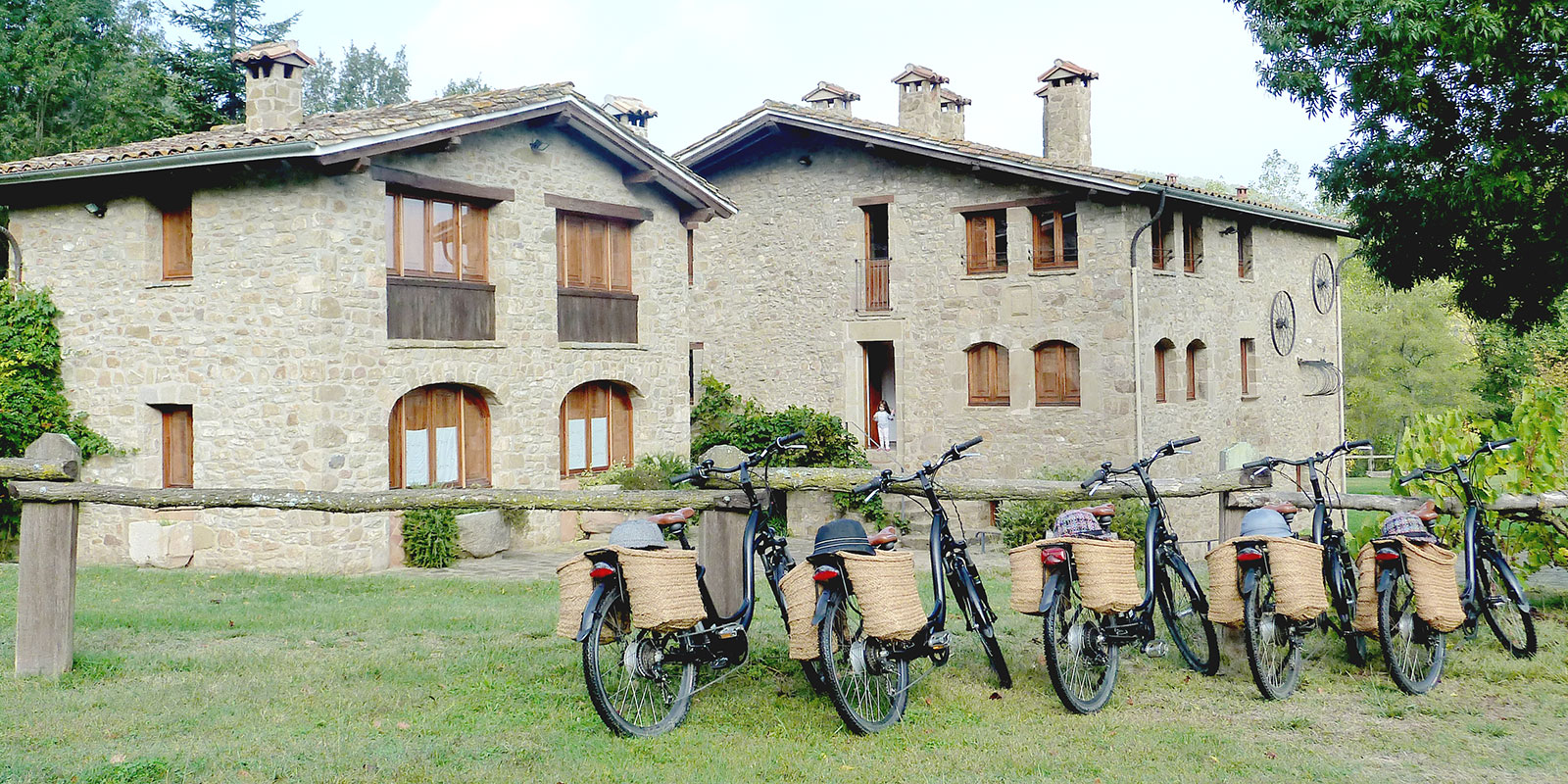 Visit St. Paul and its surroundings with guided Segway or electric bike tour. You can tour the fantastic surroundings of Santa Pau volcanic differently and fun. An activity carried out by all, where they are not needed any knowledge or skill. If you prefer, we bring the bikes also to tour leaving from the Mas El Carrer or a closed circuit for children.

Discover the different ‘green ways’ by bike. You can enjoy kilometres of unused railway infrastructures that have been turned into routes for cycle touring and hiking. 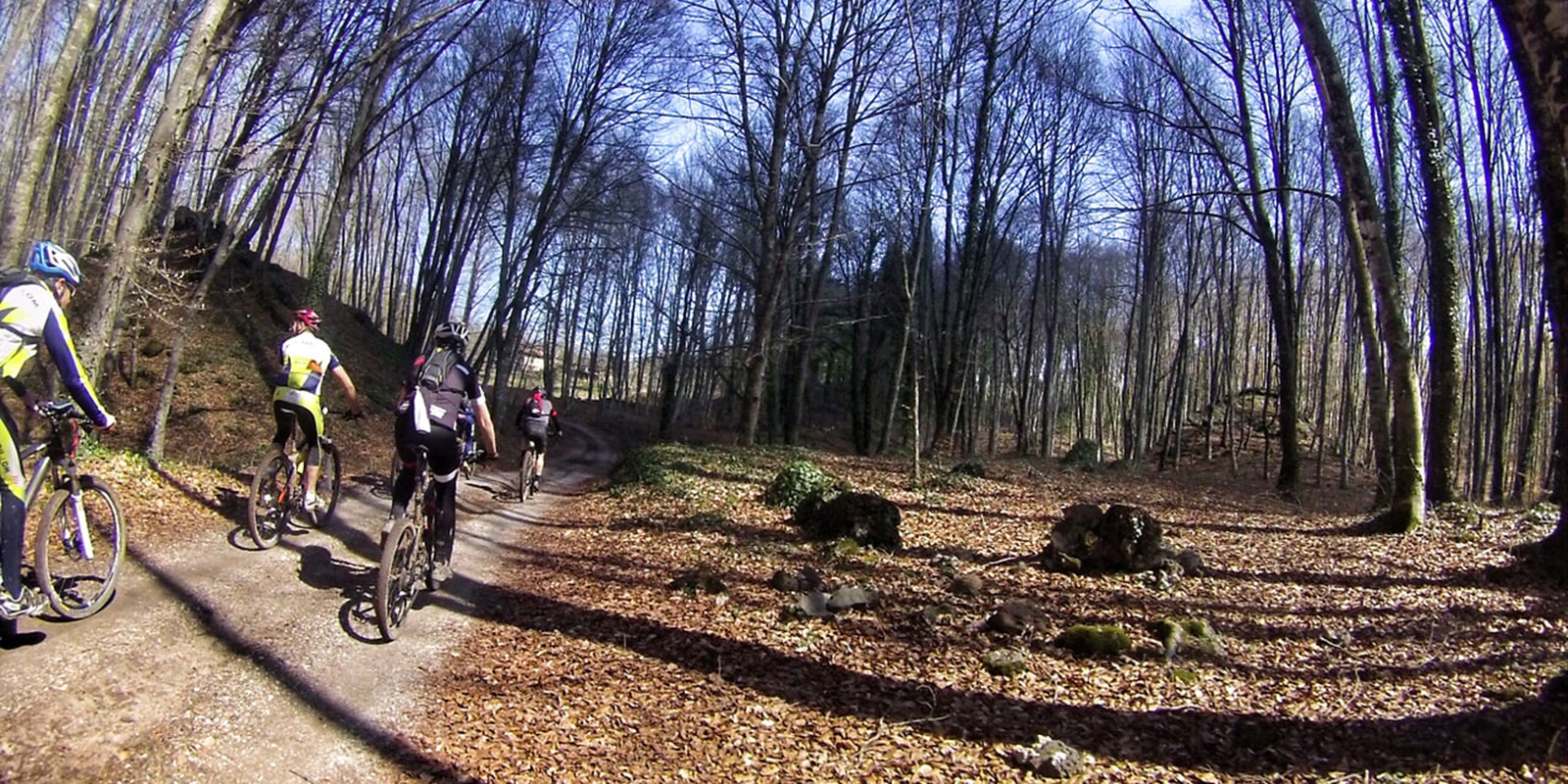 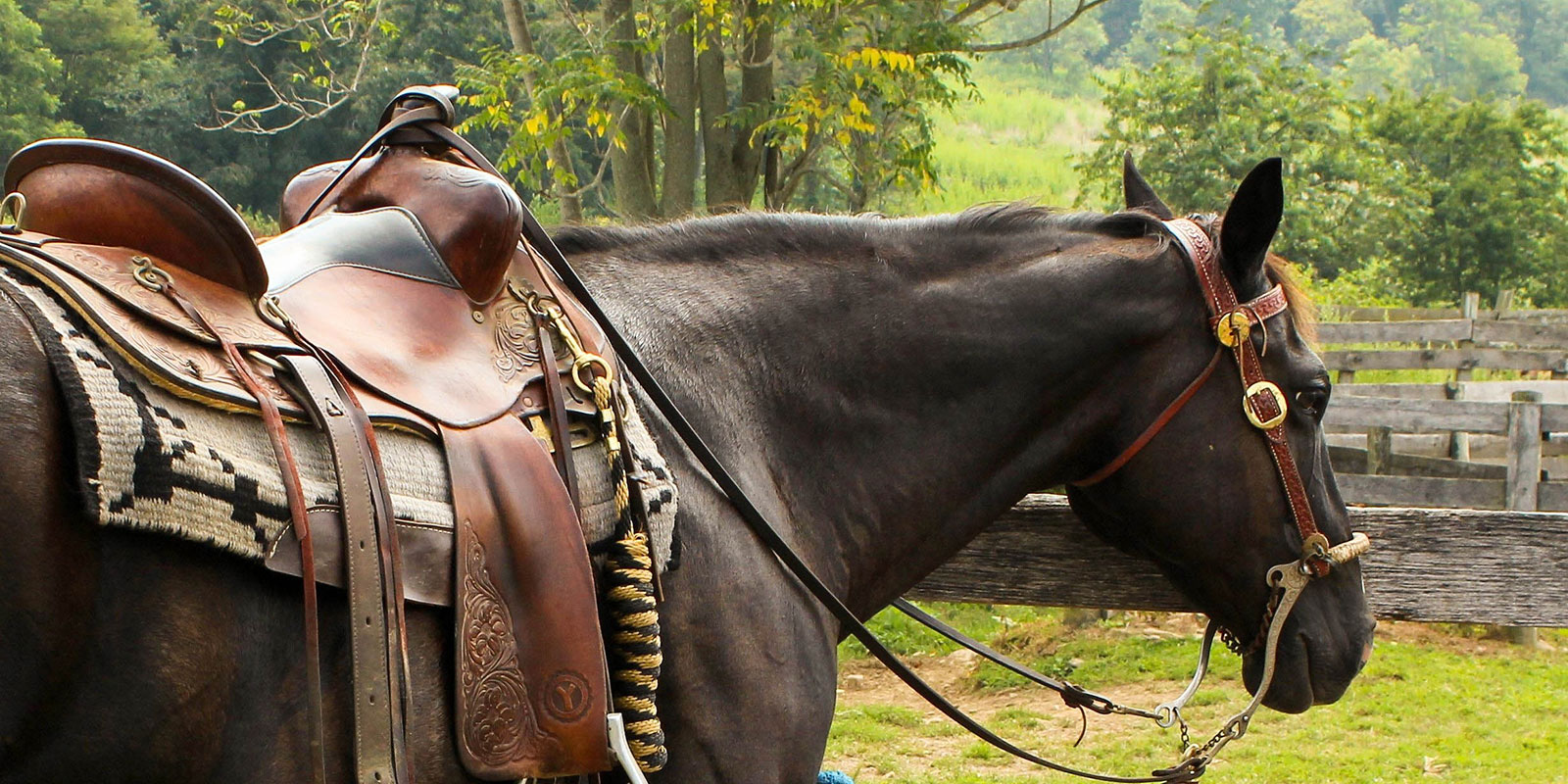 There is a large offer of stables in the region which give the chance for excursions on horseback. Another alternative for getting to know La Garrotxa.

The nature park offers unending paths. We recommend you climb to the sanctuary of Santa Maria de Finestres, from where you are offered spectacular views to the sea, following the yellow marks that you will find at Mas El Carrer.el Mas El Carrer. 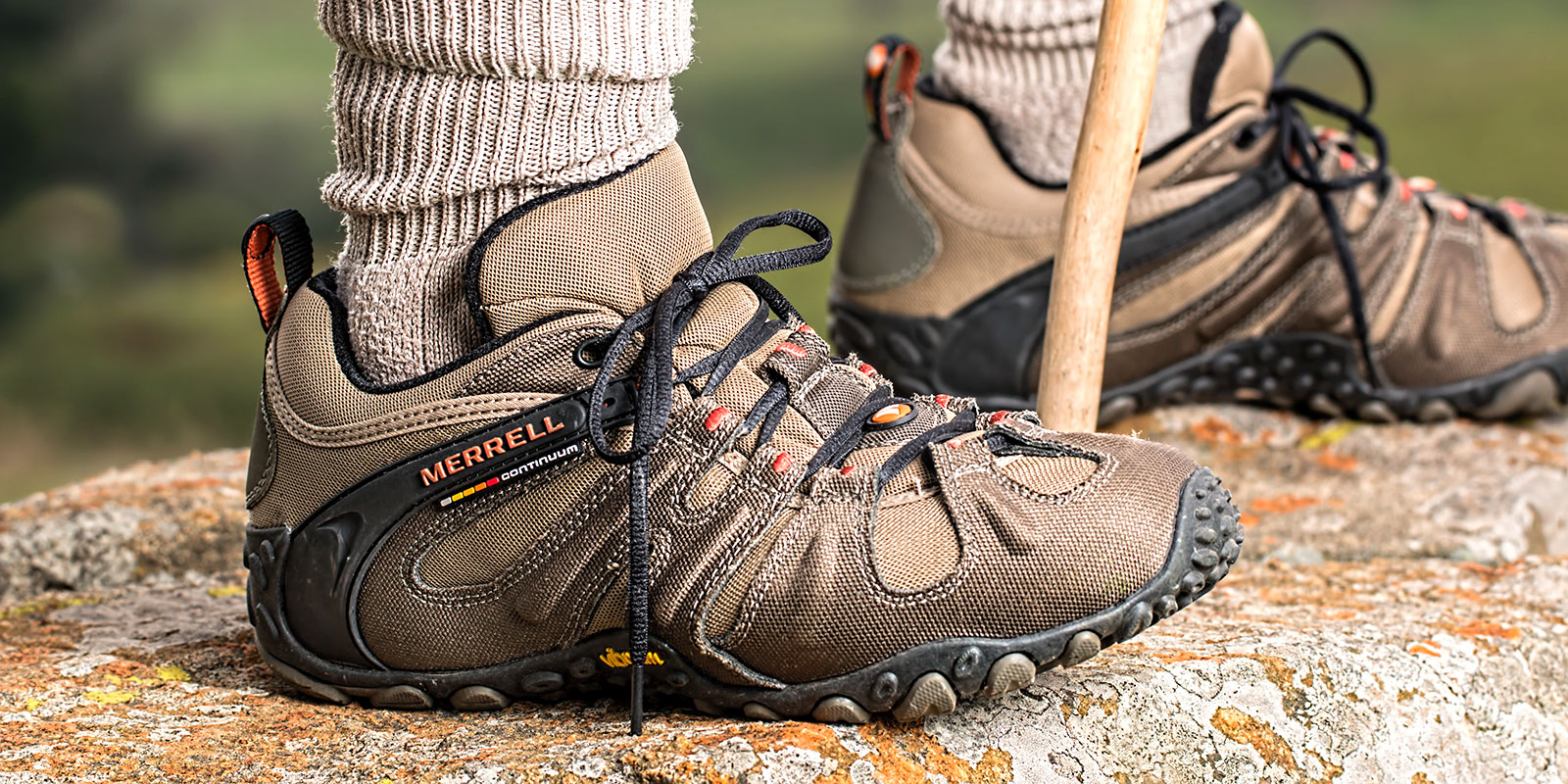 In addition, you can enjoy a lot of recreational and sports activities offered by our collaborators. 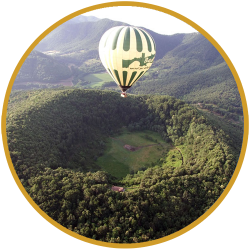 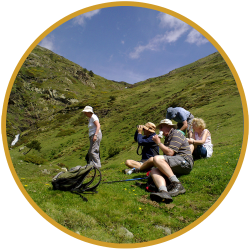 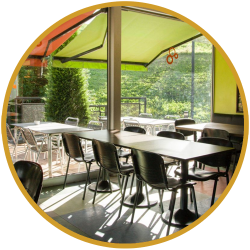 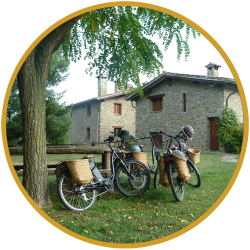 The mediaeval village of Santa Pau stands in the heart of the Garrotxa nature park between the hills of Sant Julià del Mont and Santa Maria de Finestres. The village preserves its old quarter with very clear mediaeval characteristics and physiognomy. The Plaça Major or Firal dels Bous, particularly stands out as an uneven arched square set out around the castle. The Church of Santa Maria is also another particular feature and the whole series of narrow streets that give onto the Portal de Mar. 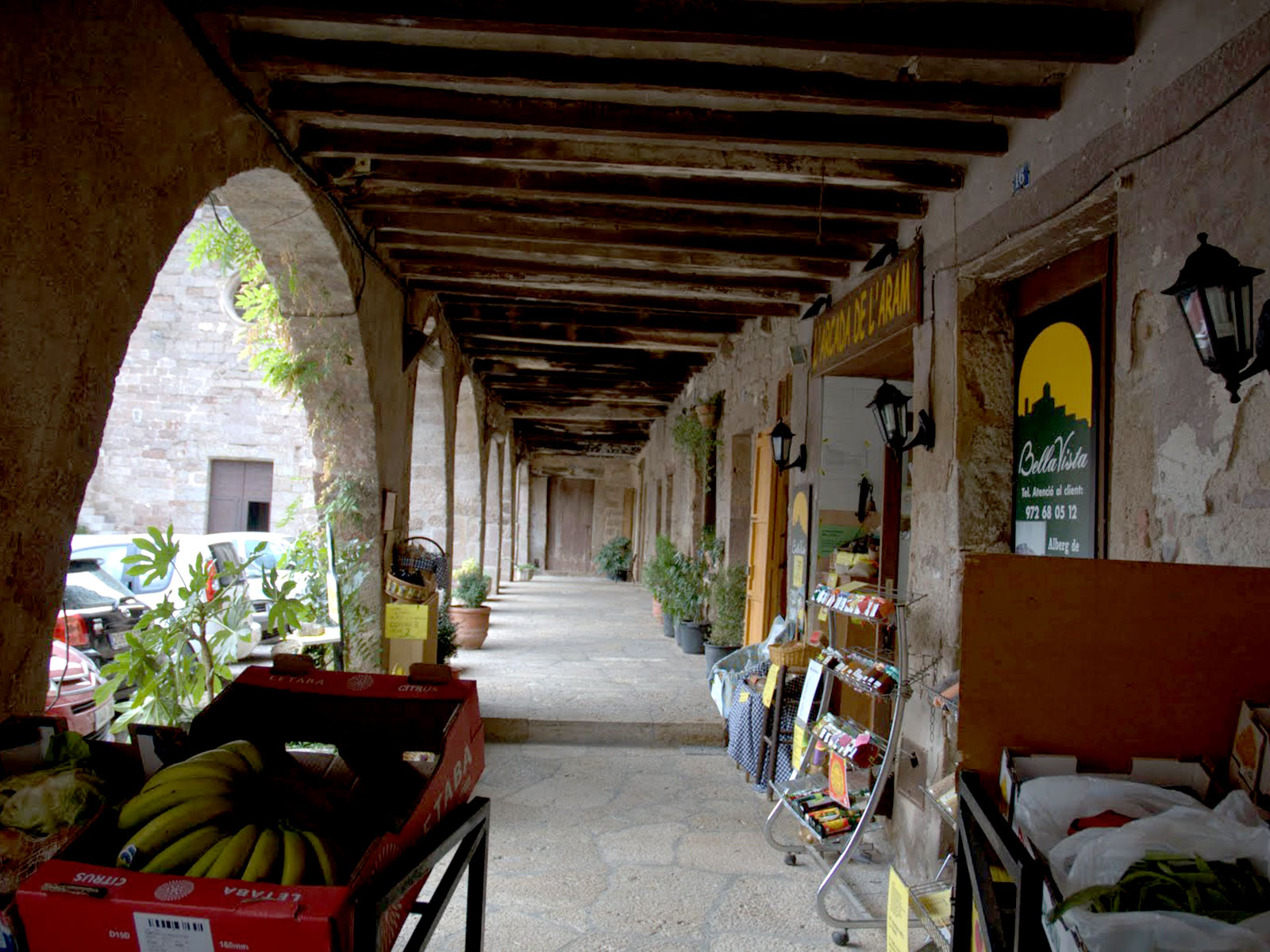 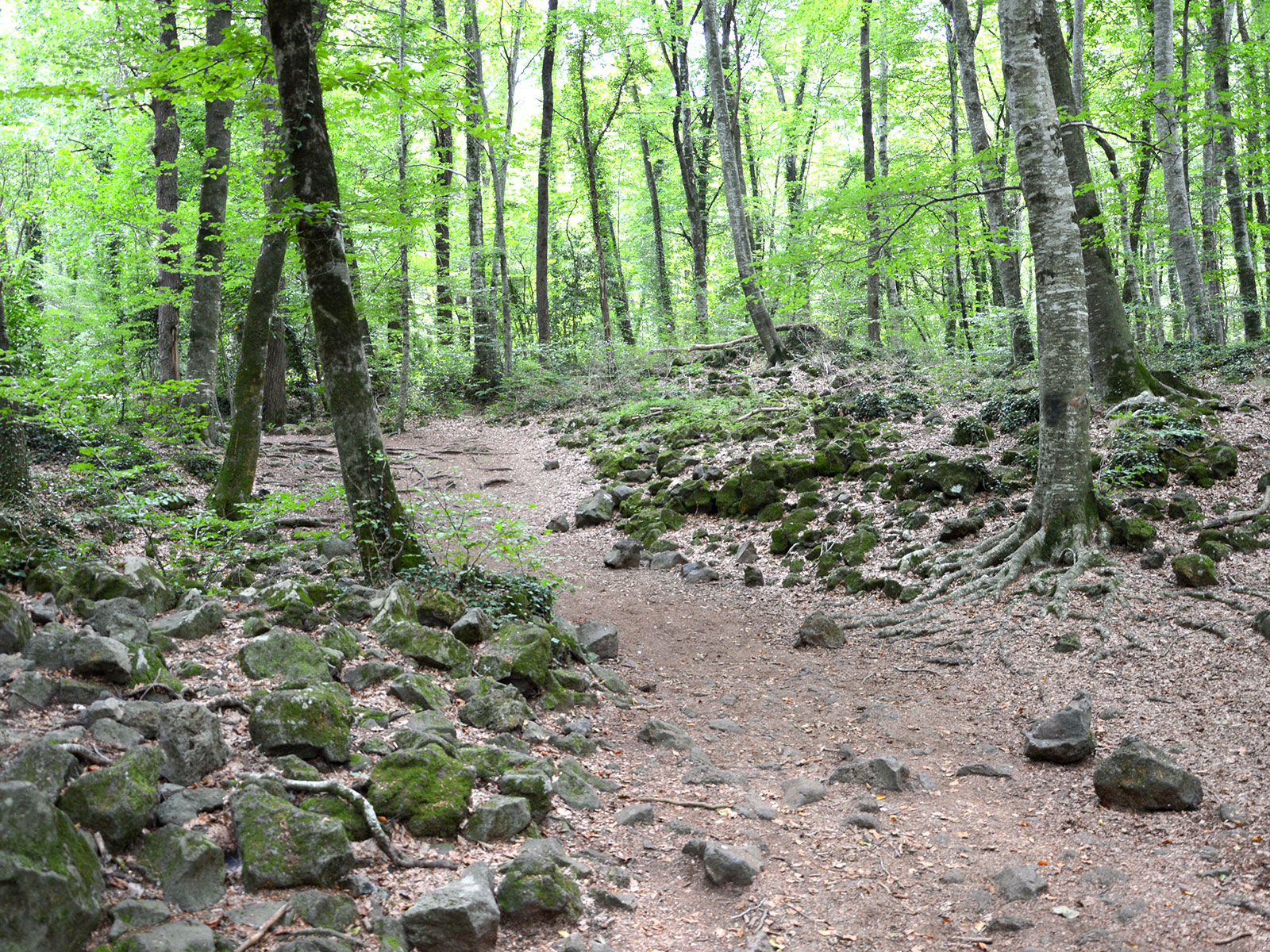 It is the best example of volcanic scenery in the Iberian peninsula. It has around fourty volcanic cones and over 20 basalt lava flows. The orography, the soil and climate provide a wide variety of vegetation, often exuberant, with beech groves, oak woods and forests of exceptional scenic value. It is a highly populated protected area that has nothing to do with the general image of a place of such characteristics, more associated with a public place organised to promote and provide fun and recreational activities or an area protected to safeguard the animal species. It has a protected surface area of 15,000 ha, which includes 11 municipalities and 26 nature reserves. The park, which aims to make preservation compatible with the economic development, is now under protection from the impact of the mining, the urban growth and uncontrolled tipping of waste.

The town of Olot is on the intersection of three valleys crossed by the river Fluvià, at an altitude of 440 metres. It is a regional capital due to its central position in the Garrotxa, to its industrial and commercial activity, to the cultural life and historical circumstances. Living amongst volcanoes is part of the daily life of the townspeople, as it is in the Garrotxa Volcanic Nature Park. Four volcans are found there, including the Montsacopa, a tower in the centre of the town. The modernist architecture and tree-lined avenues are the elements of the town which most captivate for their beauty, although we also find other architectural styles in constructions such as the Carme Cloisters (17th century) and the Church of Sant Esteve (18th-century). It also has other singular features which make it unique in the Catalan Pyrenees, such as the Moixina wetlands, a peaceful place that surprises all who go there, above all lovers of art who identify it in the works of the scenic painters of the Olot School. 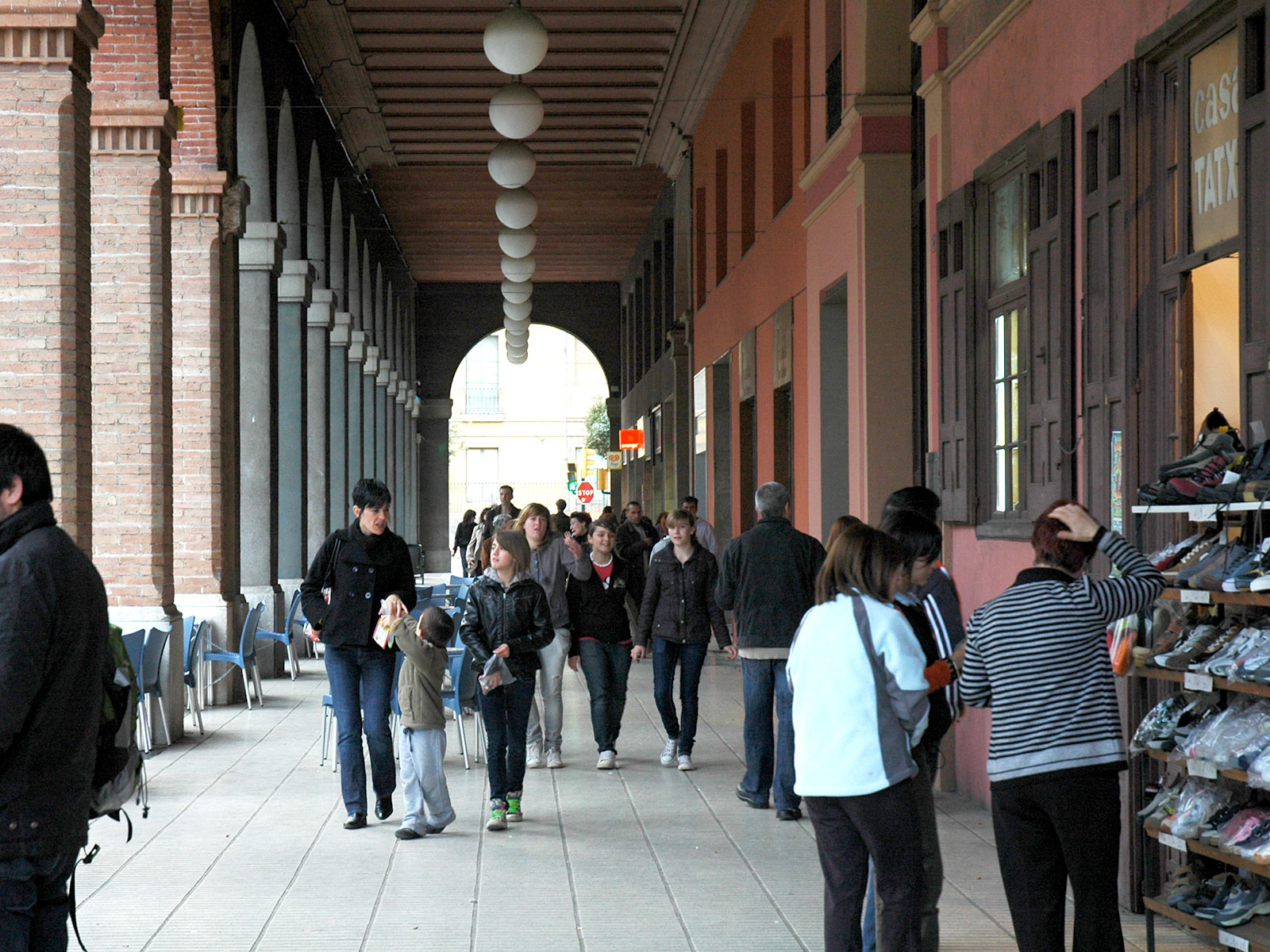 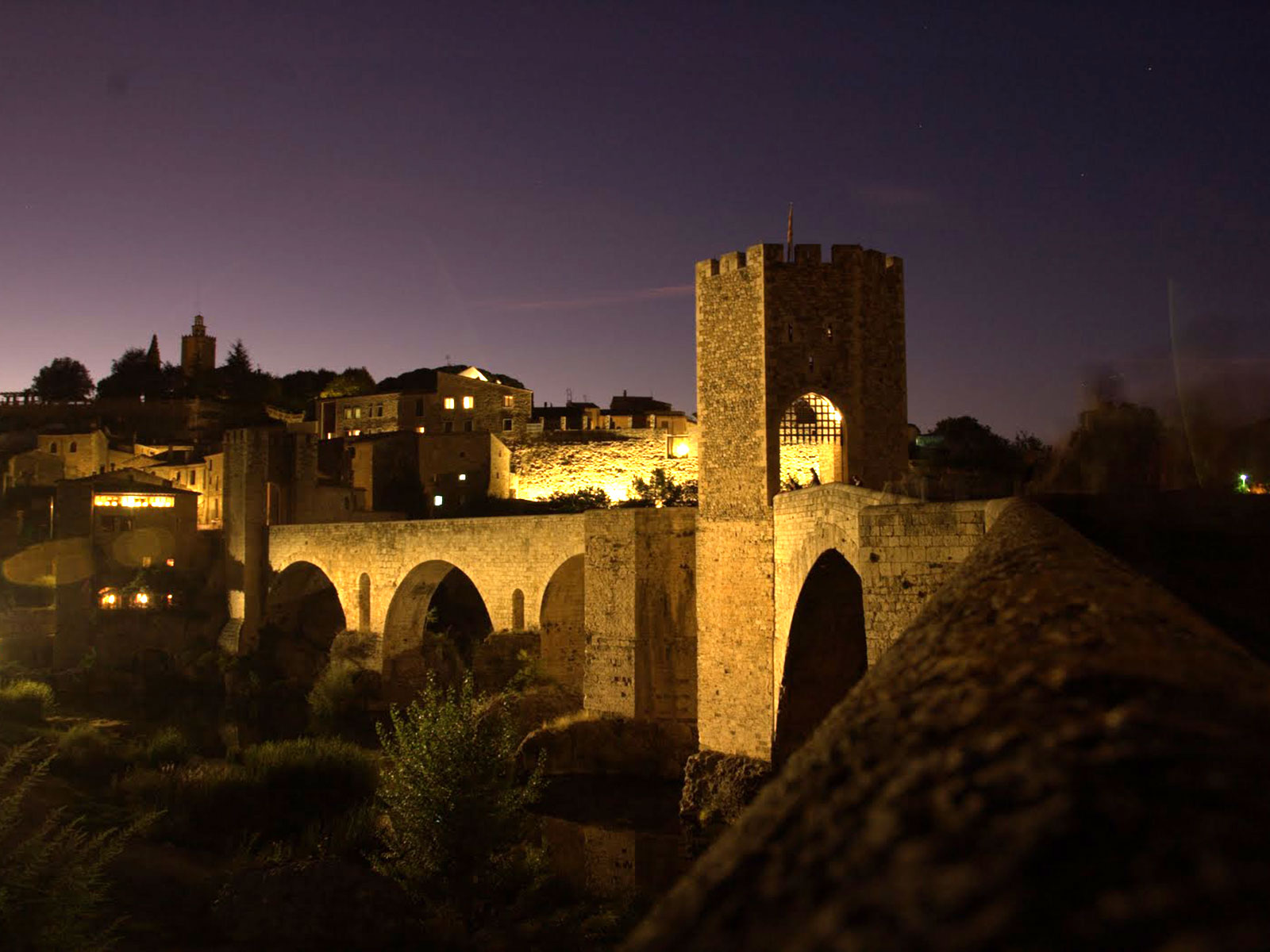 Besalú has a historical artistic complex considered one of the best preserved in Catalonia, which contains the 12th century monastery church of Sant Pere that stands out for the originality of its ambulatory; the 12th century Church of Sant Vicenç, which preserves a gothic side chapel dedicated to the veracrucis; the facade of the 12th century Church-Hospital of Sant Julià; the Casa de Cornellà, a Romanesque monument also from the 12th century; and the Gothic hall of the Creuera Reial. The whole of the Jewish quarter stands out with the most significant monument, a unique building and third in importance of Europe: the Miqvé. The Miqvé or Besalú ritual bathroom is the only Jewish bath complex yet discovered in the Iberian peninsula. It is a stone house with a typically Romanesque canon vault from the 12th century. The underground Miqvé, which is reached by stone stairs, was the place where the religious rite of bathing the women after their menstrual period, by complete submerging, took place in accordance with ancient Hebrew traditions. To finish, the Romanesque bridge over the river Fluvià is particularly noteworthy as the remains of the great counties which, along with those of Barcelona, Ripoll and the Bishopric of Girona, laid the early foundations of the Catalan nationality. Besalú must not only be appreciated for its monuments, but also for the mediaeval air of its streets full of memories.